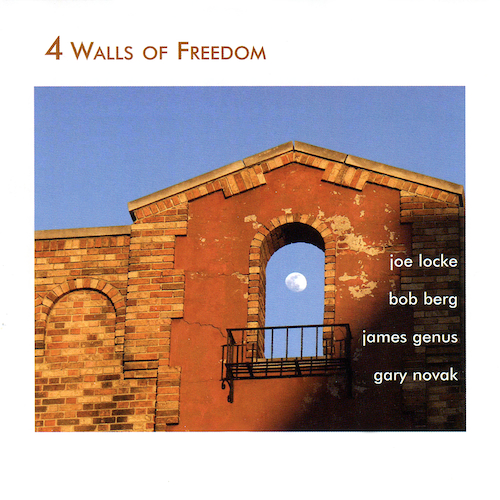 BY ANY INTERPRETATION "4 WALLS OF FREEDOM" IS EXCEPTIONAL. The '4 Walls Of Freedom' suite was inspired by the writings of Thomas Merton, whose creativity was liberated when he confined himself to self-imposed exile within a monastery cell which he called 'the four walls of my new freedom'.

Immediately before this New York studio recording, the quartet premiered the music at London’s famous Ronnie Scott’s club. The reaction was overwhelming.

The following week everybody was 'up' for the task of capturing the intense magic and beauty they had created on stage. The studio was quickly buzzing as the music started to unfold. Capture the magic they did. An amazing set of recordings that form one of the most critically acclaimed albums of the year.

MOST JAZZ FANS ARE AWARE THAT BOB BERG DIED TRAGICALLY IN A MOTORING ACCIDENT ON 5 DECEMBER 2002. THIS RECORDING, HIS LAST MAJOR PROJECT, IS DEDICATED TO HIS MEMORY. HE WAS A SUPERB MUSICIAN AND A GREAT MAN. HE WILL BE MISSED, BUT WILL NOT BE FORGOTTEN.

"Four Walls of Freedom promised a mouth-watering line-up. Joe Locke, Bob Berg, James Genus and Gary Novak, an all-American super-group. But does it fly? OH YES! This is what we want - utter virtuosity. So very, very brilliant." - Jazzwise

"For unremitting brilliance it would be difficult to match this quartet. Everyone is at the top of his game here." - CD of the Week, Dave Gelly – Observer

"Locke launches into the music with the attention-grabbing sound of MIDI vibes on the first movement. It is an exciting start to a wonderful piece that is both intelligently structured and developed, full of memorable melodies and clever harmonies on vibes. His vibes work in perfect co-operation with Berg’s richly inventive, powerhouse tenor playing. The saxophonist has never sounded better on record. RECOMMENDED" - Jazzwise

"Opening with Locke’s midi-vibes, Berg on tenor follows and takes-up the story with a full-throttle vamp before launching into an extended improvisation where melody and phrasing are paramount. Bassist James Genus and drummer Gary Novak are solid, with Novak skittering around the kit with taste and precision." - 4½ STARS – own Beat