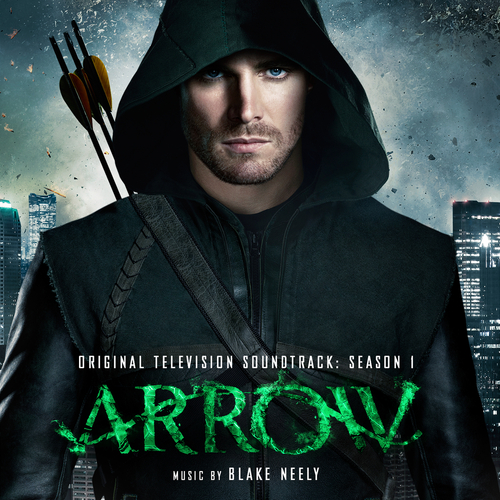 CD ONLY
DC Comic character The Green Arrow made his debut an incredible 74 years ago. Real name Oliver Queen, a billionaire playboy and socialite, renamed Arrow for the TV series he returns to his home after five years on a desert island to wage war on criminals and the corrupt in Starling City. Film and TV composer Blake Neely worked with many major names of film composing at the start of his career including Hans Zimmer, Michael Kamen, James Newton Howard and Vangelis. His score for Everwood which was Emmy nominated launched him into the higher echelon of the business and subsequent scores for The Pacific and Pan-Am also received Emmy nominations. Other credits include Brothers & Sisters, The Sixties, The Mentalist and The Flash. Arrow represents one of the biggest thrills of his career, "To a composer who grew up on comic books, action figures and costumes, this was a dream come true".

Track Listing
1 Five Years
2 Returning Home / Scars
3 City In Ruin
4 Setting Up The Lair
5 Loss And Regrets
6 On The List
7 Vigilante Justice
8 Honor Thy Father
9 Inhospitable Island / Deathstroke
10 I Forgot Who I Was
11 Train And Hunt
12 Betrayed By Those You Love
13 Chasing The Hood
14 Damaged
15 The Dark Archer / It Is I Who Failed This City
16 Working Together But Alone
17 The Count
18 Friends In Arms
19 Trust But Verify
20 Join Us
21 Trusting A Friend, Saving An Enemy
22 Sins Of The Father
23 I Can't Lose You Twice
24 Search For Salvation
25 Shado Sees An Emerging Hero
26 Unfinished Business / Saving Walter
27 A Way Off The Island
28 Sacrifice
29 Oliver Queen Suite

“Blake Neeley's score for the first season of The CW's Arrow television series is far bigger and far more diverse in sound than one would normally expect from a TV superhero series.”

“For fans of The CW's Arrow, one couldn't ask for a better collection of music from the series. Blake Neeley's music manages to be that rarest of things: a broadcast television score which is original, not just some knock-off of other superhero tropes. At 75 minutes, the music crams a compact disc, but as compiled here, it absolutely flies by. It's astonishing to notice that the music has ended and well over an hour has been spent in rapt attention.” - Starburst Magazine 8/10

Blake Neely is a composer who understands what his subjects basic needs are in sound, and, creates a beautiful landscape in his scores that truly flesh out the stories we watch.
I would suggest adding this to your collection. - Agents of Geek 4/5