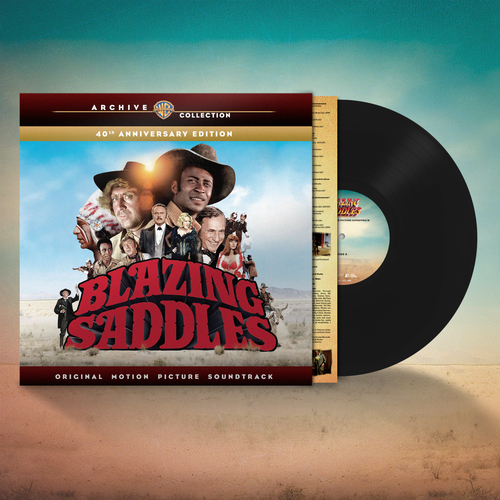 Blazing Saddles is widely regarded as one of the greatest of all Hollywood comedies, a fact underlined by its three Academy Award nominations. Writer and director Mel Brooks brought to the soundtrack exactly what played out on screen, a glorious, gag-packed parody of the western genre. The main theme performed by Frankie Laine was one of those Academy Award nominations. Running a trade ad to find a Laine sound-alike to perform the song he was astonished to see the great man himself turn up to deliver this delicious parody of of every wild west theme he had previously performed mixing elements of Rawhide, Mule Train and Gunfight At The OK Corral. In collaboration with John Morris, Brooks skilfully also created a magnificent score that refined every possible musical cliche connected to westerns from swirling strings to choral refrains. Originally only released in part in the 1970s this 40th anniversary edition is the most complete version yet with 28 tracks that also incorporates some of the most hilarious dialogue from the film. This is a soundtrack created with love that captures perfectly the essence of a truly great film, now a rarity in the modern cinema era.

…regular Mel Brooks composer John Morris’ short but pitch-perfect work for what was Brooks’ finest, most gleefully politically incorrect hour remains undimmed. The theme song, with impassioned vocals from Frankie Laine, could quite comfortably have featured in any of the classic Westerns the film spoofed. Elsewhere, Madeleine Khan’s Dietrich-like torch song I’m Tired remains uproariously filthy, and Cleavon Little’s mischievous take on Cole Porter (“Some get a kick from cocaine...”) will further spark a quoting frenzy. While all-too-brief, Morris’ orchestral cues are superb, played straight and faithful - like all the best comedy scores - and are certainly a key ingredient in the film’s success. - Empire 5*

Blazing Saddles may not be everyone's cup of tea, but, to quote the movie's bad guy, "rustlers, cutthroats, murders, bounty hunters, desperadoes, mugs, pugs, thugs, nitwits, dimwits, vipers, snipers, con-men, Mexican bandits, muggers, buggerers, bushwhackers, hornswogglars, horse thieves, train robbers, bank robbers, ***-kickers, ****-kickers and Methodists" may want to give it a try. As with the film, the soundtrack offers something to offend almost anyone at one point or another… The performance by the Blazing Saddles Orchestra under the direction of the composer can justly be called definitive… - AllMusic.com

There was a time when even the crudest satires could be treated with elegance, where a composer could treat flatulence, cuss words and sexual innuendo with lush, sing-along melody instead of a crescendo over every fart. And in the history of hilarious vulgarity, few scores stand out in that way like BLAZING SADDLES, a rip-roaring salute to everything that was filthy about Hollywood’s whitewashed Old West. - Film Music Mag

“This is just great comedy music, period... a short, but fun ride. Of course if you are a fan of the movie (and who isn’t?), there are plenty of fun other than the score, like some dialogue and show tunes. In any case, if you missed out on the La-La Land edition, now’s a good chance to grab the soundtrack.” - Soundtrack Geek