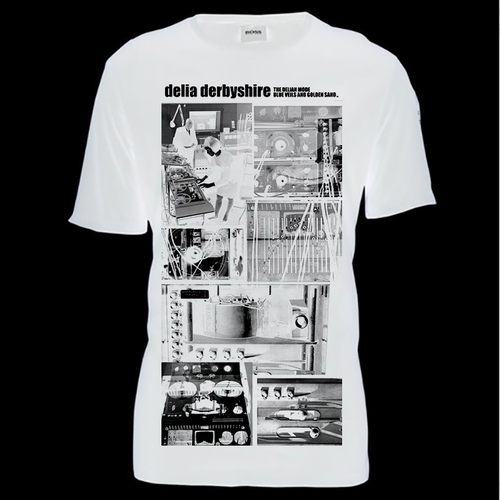 Delia Derbyshire's work at the BBC's Radiophonic Workshop in the 60's was recognised initially for her realisation of the now iconic Doctor Who Theme which was written for the show by Ron Grainer. More recently though, she has been celebrated for her own compositions and experiments at what was then the cutting edge of electronic music. This unique shirt has the cover of the limited 7" vinyl release of two of her pieces (Catalogue Number SIL71458). The AA side was written for a TV documentary in 1967, Blue Veils and Golden Sands, in which she used her own voice and a handy green BBC lampshade: "I analysed the sound into all of its partials and frequencies, and took the 12 strongest, and reconstructed the sound on the workshop's famous 12 oscillators to give a whooshing sound. So the camels rode off into the sunset with my voice in their hooves and a green lampshade on their backs."