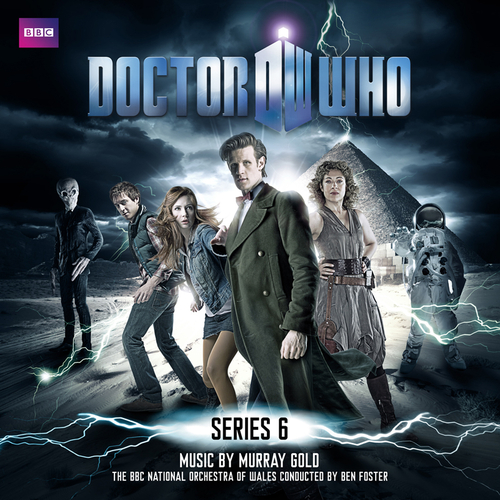 This is the seventh Doctor Who release of Murray Gold’s thrilling music, a 66 track double album featuring lush performances from The BBC National Orchestra of Wales.
Six years of composing riveting music for Doctor Who has led to Murray’s work being performed at a special Proms concert at the Royal Albert Hall, a celebration of the music at the Millennium Centre Cardiff and a place in the Classic FM Hall Of Fame
Murray Gold’s musical career spans cinema, TV, stage and radio and his extensive list of achievements includes Queer As Folk, Randall & Hopkirk (Deceased), Casanova, Alien Autopsy, The Devil’s Whore, Shameless and Torchwood.
Performed by The BBC National Orchestra of Wales and conducted by Ben Foster.

Reviews
Most fans of the phenomenal reboot of Dr. Who will need little convincing to seek out this latest 2-disc Silva presentation of music from the British series. Murray Gold continues to be given a broad cinematic canvas with which to work, allowing for often stunning musical support. Series Six follows Matt Smith’s rendition of the Doctor through his various adventures. As with previous releases from the series, this set features a good collection of music from the first two-part episode and highlights from the additional 10 episodes. The opening “I Am the Doctor in Utah” features one of the newer thematic ideas, which Gold introduced in Series 5. The music boasts beautiful vocals by Mae McKenna that cast a shadow across the series. In many respects, the music for Series 6 builds on the innovative touches introduced the previous season. Strong thematic writing and recurring ideas bolster the scoring as the various stories unfold. The music connected to River Song plays an important role in particular throughout Series 6. The first two episodes (The Impossible Astronaut and Day of the Moon) feature brass writing straight out of a David Arnold Bond-score. These jazzier elements are also reminiscent of Gold’s recent work on Hoodwinked 2; they feature more synths, electric guitar and percussion, though the thrust of the music continues to be a large orchestral sound. The series’ historic or futuristic settings offers Gold many opportunities to let loose, as in “The Curse of the Black Spot,” with its mesmerizing “Deadly Siren” and hints at swashbuckling music. “I’ve Got Mail” from “The Doctor’s Wife” has moments of cinematic soap opera and subtle humor. The wind writing in “My TARDIS” is particularly striking, delivered with lush harmonies. One of Gold’s hallmarks is the use of arpeggiated action motifs, similar to material in Don Davis’ Matrix scores. This is on display in several big action cues. Gold’s inclusion of ethnic instrumentation often recalls Greg Edmonson’s Firefly, but the budget here is larger, allowing for more of an orchestral sound overall. This can be heard in the fascinating music for the two-part episodes of “The Rebel Flesh” and “The Almost People.” “Loving Isn’t Knowing” has some of the most acerbic writing on the album, yet also showcases some simple lyric beauty. “Growing Up Fast” from “Let’s Kill Hitler” (which opens disc two) is one of the more striking smaller ensemble numbers, reminiscent of light British romantic comedy scoring. The music for “Night Terrors” features some of the creepiest music in this collection (especially in “A Malevolent Estate”). This material finds a parallel reference later in “Tick Tock” from “The Wedding of River Song.” “Closing Time” is another unique bit of scoring, delving full on into a sentimental sensibility in “My Time Is Running Out.” Many of these dramatic turns will find their culmination in the music for the episode “The Wedding of River Song,” which features a character track for Brigadier Lethbridge- Stewart. The accompanying booklet features brief comments about each episode. In an interesting move, Gold invited fans to suggest via Twitter what musical moments should appear on this release. Hopefully they will find their wishes fulfilled here. Regardless, there is plenty of music to enjoy, including a little surprise from “Day of the Moon” as a send off. —Steven A. Kennedy FSM ****