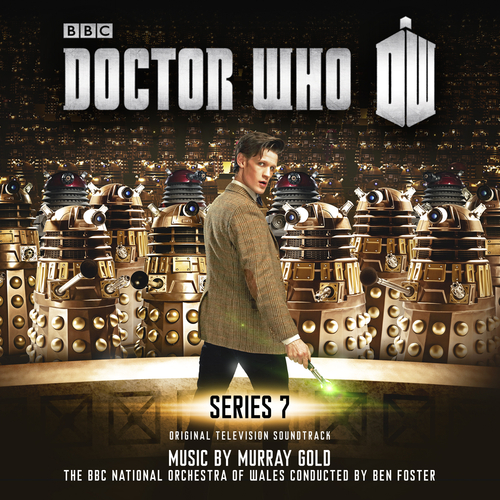 THIS CD VERSION OF 'DOCTOR WHO - SERIES 7' IS THE JEWEL CASE PRODUCT.

Silva Screen’s eighth Doctor Who soundtrack release since 2006. Long awaited by the fans, Series 7 has been uniquely made up of 13 self-contained stories and this 2 CD set offers a feast of new Murray Gold signature themes with music from each and every story.

Gold’s phenomenal output as a composer began close to twenty years ago and he has stacked up five BAFTA nominations (two for Doctor Who) plus three Royal Television Society nominations and a win for Queer As Folk. In 2013 Murray Gold celebrated one his greatest musical accomplishments with a third Doctor Who Prom at the Royal Albert Hall.

“…another classic for the collection which affirms Murray Gold’s status as one of the best TV composers today.” - Whoviannet.co.uk

“If you have to pick up any album this year, this decade, then make sure it’s this one. Really. Music has never been better." - DoctorWhoTV

"...sometimes life does not get any better and here's the proof… Brash, discordant, stirring, heart-wrenching, tear-jerking and as quirky as Doris Day 'sickly-sweet' rom-com saturated with painful truths and comic observation sums ups Murray Gold's original television soundtrack for DOCTOR WHO SERIES 7”
Eye of Horus

"…an undisputed triumph of substance over style" - Eye of Horus

“So, yeah, if you like Doctor Who this is a shoe-in, just like all the other collections of new Who soundtracks. Deserving of a place in your collection.” - Blogtor Who


“You certainly can't argue with the quantity of Whooney Tunes you're getting in exchange for your Earth credits. At 74 tracks (76, if you get it iTunes-ed into the Type 2 chip in your forehead), it's the biggest album to date: an audio TARDIS.”
If you've been collecting Doctor Who soundtracks since the simple days of the Series 1&2 CD, this is another thrilling chapter in the Doctor's musical journey, made more important by the knowledge Eleven's song will be ending very soon. - CultBox TV