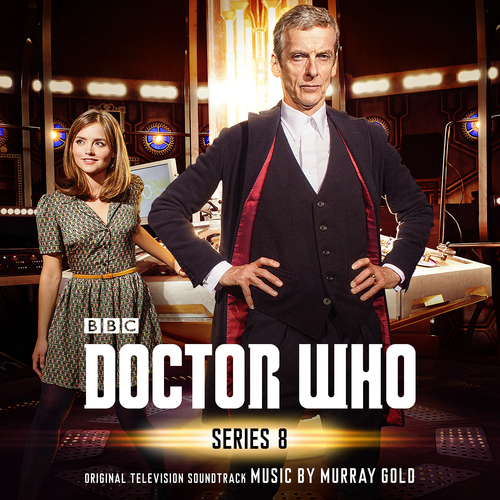 This 3 disc set in a jewel case will be the first soundtrack release of music from the twelfth Doctor Who, Peter Capaldi, featuring the new Doctor’s theme A Good Man?(Twelve’s Theme). It also includes the music from the episode Last Christmas and an extensive 24 page booklet with notes from Murray Gold. The score is performed by the BBC National Orchestra of Wales, Murray Gold (computer instruments, guitars and synths) and conducted by Ben Foster and James Shearman. Missy’s Theme from episode 6, The Caretaker, is sung by Halia Meguid, whose ethereal voice was heard in the Series 6 and 7 scores. Murray Gold’s phenomenal output as a composer began more than twenty years ago. He has since stacked up five BAFTA nominations (two for Doctor Who) plus three Royal Television Society nominations and a win for Queer As Folk.

“Always a treat for a Whovian’s ears, the eleventh album of music since the show’s return continues to show no drop in the quality of Murray Gold’s work or the breadth of his imagination.”

“From the Gothic clickety clockwork of Victorian London all the way to a John Carpenter-esque nightmarish Christmas, Season 8 took us on a whirlwind journey with Murray Gold and The National Orchestra of Wales as our ever-reliable musical companions.”
Cultbox ****

“Resident composer Murray Gold has regenerated again in line with the show’s eponymous hero, taking us on another wild journey of musical adventures. And if you need one final incentive to pick it up, there’s a 24-page booklet with notes from Gold. The first 5,000 copies are slipcased and include a 16-page booklet of Stuart Manning’s 13 retro posters. Stop reading this review and drop this into your shopping cart!” - Sci-Fi Bulletin 9/10

“...the show has increasingly been harking back to its original 1963–89 run, and this is
reflected in the music. There’s an electronic Radiophonic Workshop vibe to some of the
tunes from Into the Dalek and Flatline, while the percussion and bass in “The Artefact”
(from Mummy on the Orient Express) seem to be recalling Dudley Simpson’s work from the mid to late 1970s in general and Pyramids of Mars in particular.”
“You’d be a pudding brain to miss out!” - Sci-Fi Online

"Robin of Sherwood" is reminiscent of the Errol Flynn film with its heroic theme. "The Caretaker" could have easily been a part of any of Matt Smith's episodes, with an intro that would befit the Three Stooges. "Missy and her Boys" is a fun number, even if it sounds like it should be part of a dance routine. "(The Majestic Tale of) And Idiot With A Box" is an upbeat piece that shows the strength of The Doctor as a character, giving him the hero quality he deserves, even if he doesn't believe he does. "Open Up" harks to the heist film genre, with hints of James Bond thrown in. "Sleigh Ride" could be included in any Christmas program, and is just a lot of fun with it's sleigh bells and lilting melody. And the closing song "Every Christmas is Last Christmas" is our one moment of really great Murray Gold grabbing us by the heartstrings and not letting go. - Shadowlocked

"Packaged with an extra booklet of Stuart Manning’s evocative and stylish retro movie posters, this is a soundtrack that you will return to time and time again. With the BBC National Orchestra of Wales ably conducted by Ben Foster and James Shearman, this is pure Murray Gold, able to pull the heart strings and quicken the pulse when required, and yet fresh, dynamic and surprising when it matters. Much like the Twelfth Doctor himself." - Doctor Who Magazine