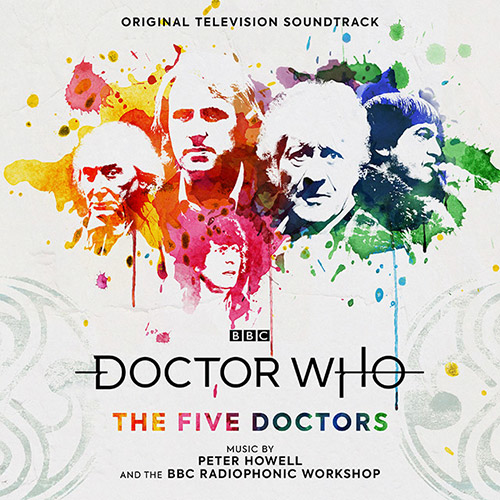 FOURTH IN A COLLECTABLE SET OF EIGHT ALBUMS

The bracing, spine-chilling and atmospheric music soundtrack was composed by Peter Howell at the
BBC Radiophonic Workshop, with special effects by Dick Mills. The Five Doctors album
features both the original score and the BBC Video special edition version which was, in 1995,
produced, reworked and extended by Peter Howell.
Peter Howell comments: “Listening again to the score for The Five Doctors, it seems to represent a
very particular period in time when the variety of sounds at our disposal was becoming extensive, yet
the ability to memorise them was yet to come; when the quality of taped sound was impressive but
the equipment was large and the use of it sometimes clumsy and mechanical. In those days, you
really did need a studio full of gear and you really did need to play it all.”
The Five Doctors (1983), was a 90 minute TV special made by the BBC to celebrate 20 years of
Doctor Who. In this extraordinary story The Doctor and his previous incarnations are brought to the
Death Zone on Gallifrey as part of a renegade Time Lord’s scheme. Here, Peter Davison joins
previous Doctor Who incarnations - Richard Hurndall (standing in for the deceased William Hartnell),
Patrick Troughton, Jon Pertwee and Tom Baker. Famously, Baker declined to appear so some
footage from “lost” story ‘Shada’ was used instead.