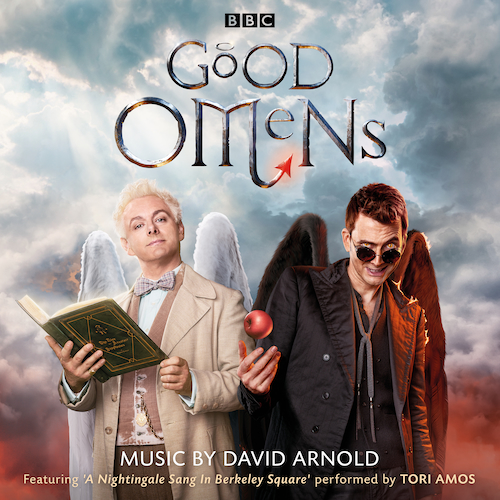 Composer David Arnold’s soundtrack to the highly anticipated TV adaptation of Neil Gaiman and
Terry Pratchett’s 1990 comic fable that packs a punch.
Following the odd couple, angel Aziraphale (Michael Sheen) and demon Crowley (David
Tennant) in their quest to sabotage the end of the World, Amazon Prime's six episode miniseries
delivers a tongue in cheek adaptation of this powerful and funny story.
From the Award-winning composer of Sherlock and Casino Royale comes a soundtrack that
perfectly complements the Good Omens’ drama and visual sensibilities. At times nostalgic and
eerie but always varied, beautiful and full of excitement, this robust, yet funny music entity has
become another character in the story. Here, Arnold has created a contemporary soundworld
for heaven and hell.
The closing song is Tori Amos’ version of A Nightingale Sang In Berkeley Square, a British
wartime favourite referenced at the end of the book, conjuring feelings of separation and pining
for untroubled times, and including the lines "There was magic abroad in the air. There were
angels dining at the Ritz. And a nightingale sang in Berkeley square".
Good Omens is produced by BBC Studios, Amazon Studios, Blank Corporation and Narrativia.
The series is directed by Douglas Mackinnon and features the all-star cast including Michael
Sheen, David Arnold, Frances McDorman, Brian Cox, Benedict Cumberbatch, Jon Hamm.
David Arnold is one of the UK’s leading film composers, composing scores for blockbusters
including Stargate, The Chronicles of Narnia: the Voyage of the Dawn Treader, Hot Fuzz, Paul,
Independence Day, 2 Fast 2 Furious and Casino Royale.
Also available on Silva Screen Records are David Arnold’s soundtracks Sherlock Series 1, Sherlock
Series 2, Sherlock Series 3, Sherlock Series 4 and Sherlock - The Abominable Bride.
The Good Omens TV series launches on Amazon Prime Video around the world on Friday 31st
May 2019 and will be shown on BBC2 in the autumn.

With such a lot of great new small screen drama being made for TV and streaming, it’s no wonder big-screen composers are being lured into longer-form projects. Emmy-winning composer David Arnold follows his popular scores for Sherlock with the BBC/Amazon Studios’ show Good Omens. Based on Terry Pratchett’s book, the tale of angels and demons on earth is darkly humorous and Arnold’s wide-ranging score matches it with gothic horror and comic swagger. The main title theme, a bounding waltz, is wonderfully tongue-in-cheek and a far cry from the composer’s brilliant and ballsy Bond scores. A rollicking trip to hell and back on two discs. Silva Screen SILCD1593
BBC Music Magazine 4*