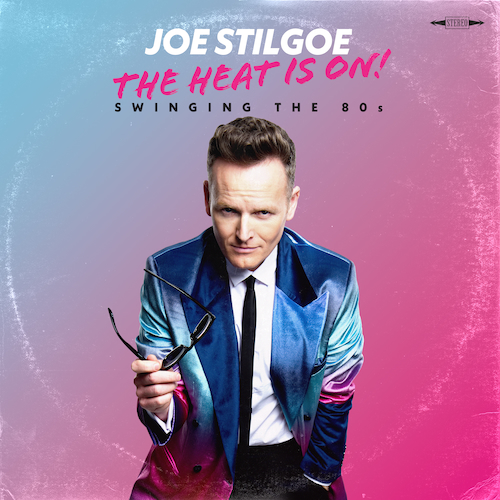 Joe Stilgoe - The Heat Is On: Swinging The 80s

Joe Stilgoe - The Heat Is On: Swinging The 80s

Singer Joe Stilgoe has reunited with old university friend and award-winning composer / orchestrator Evan Jolly, to create this
album of classic 80's film song covers in a unique swing style. Using the great arrangers of the 1950's as inspiration –
Nelson Riddle, Robert Farnan, Sammy Nestico - these classic songs are almost unrecognisable in their new guise as perhaps
the lost standards from the decade of swing and rock ‘n’ roll.

Says Joe - “Growing up in the 80s in Southern England wasn’t much like the movies, but on the
daydreamy days I would imagine I was Tom Hanks in Big, Michael J Fox in Back To The Future,
Judd Nelson in The Breakfast Club and sometimes even Mary Stuart Masterson in Some Kind Of
Wonderful. I fell in love with the music from American films, as they seemed to have everything
I longed for - the wide streets with white clapboard houses, perfect front lawns and strangely
amenable older residents with hoses, the bikes with armchair seats ridden by the kids in ET, the
sense of adventure and stories in Stand By Me, the massive drums and massive choruses from
those ballads that only the 80's knew how to deliver. All that was missing for a boy who would
go on to dream of singing with a big band was that - big bands. I don’t remember any big band
music from the 80s, or at least, none that reached me. So, for this album, I thought we’d bring it
all together. What if all these songs from all these life-changing movies were actually big band
classics?”

Joe Stilgoe is a true modern-day entertainer, known globally as a performer of wit, style
and a level of musicianship which has seen him be recognised as one of the best singerpianists
in the world. Always searching for a new way of bringing not only his own songs,
but those he loves from the past to a new audience, he is, as some have described, a blend
of his heroes Harry Connick Jr, Danny Kaye, Nat King Cole and Dudley Moore.
He has released 5 critically lauded albums, three of which have topped the UK Jazz chart,
and as a live performer he has toured around the world with his band and as a solo act,
appearing in festivals, jazz clubs and concert halls from Ronnie Scotts to The Albert Hall to
Birdland in New York. He is frequently a guest performer with orchestras including The John
Wilson Orchestra, RLPO, RTE and the BBC Concert Orchestra, and regularly puts together
his own big band for sold-out shows across the country.