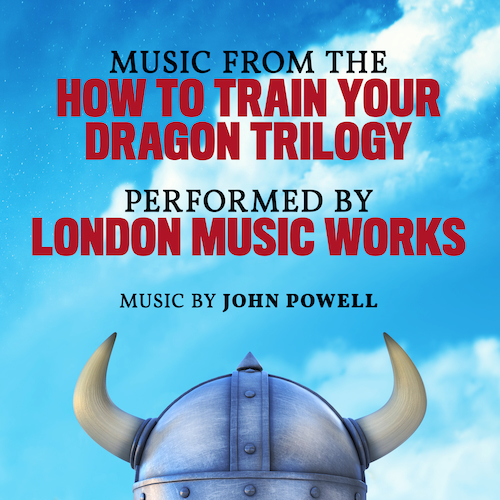 Music From The How To Train Your Dragon Trilogy

Featuring 14 exhilarating themes from John Powell’s scores, performed by London Music Works.
Based on Cressida Cowell's popular children's book, set in a mystical Viking world, the animated trilogy follows
the story of teenager Hiccup, and dragon Toothless. Aspiring to be a dragon slayer, Hiccup captures his first
dragon, but instead of killing Toothless, he befriends him. This rousing epic mixes comedy, touching moments
and action sequences and John Powell’s masterful score perfectly complements it. The trilogy proved to be
both a critical and commercial success, grossing $1.6 billion worldwide.
In How To Train Your Dragon series, John Powell relies on the tradition of Wagnerian leitmotifs. The themes
representing different characters, concepts and locations are spread across the trilogy and are varied and
developed, orchestrated in different ways. Often, the tempos and moods change and the themes play in
counterpoint to one another.
John Powell has scored several excellent animated films before the How To Train Your Dragon series, including
Antz, Chicken Run, Shrek, Kung-Fu Panda, and the Ice Age. With How To Train Your Dragon series Powell
earned his first Academy Award nomination and his third BAFTA nomination. The score also won the IFMCA
2011 Awards for Best Original Score for an Animated Feature and Film Score of the Year.
On this album, London Music Works skilfully brings together a selection of the very best themes from Powell’s
consummate and game-changing animation score.

“This compilation has been thoroughly researched by someone at Silva Screen Records who not only loves
Powell's music, but also has an incredible ear for structuring a compilation album. This flows incredibly well,
with one track seamlessly following on from the next as though they were originally designed to work this way.
London Music Works do an incredible job of pretty much representing the original score. The recording is as
professional as the original recordings.”
- Sci-Fi Online 10/10

“The album features the label’s house ensemble London Music Works, which acquits itself very well. The opening of “This Is Berk” feels like a slightly smaller group at first, but when things ramp up, the forces prove to be more than adequate.”
“Silva’s overviews of film franchises tend to be well thought out, and this one is no exception. It is highly recommendable to any fan of the HTTYD series.”
FSM 4*