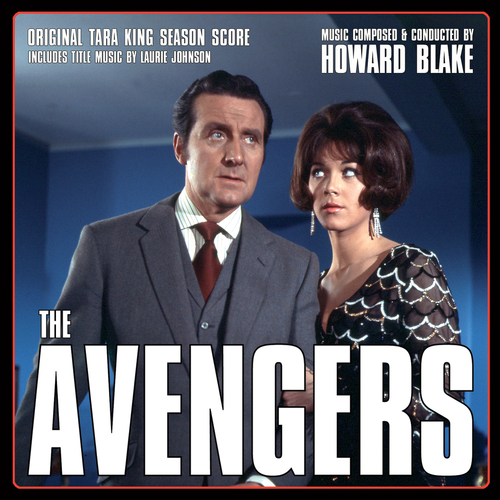 A 2 CD set featuring Howard Blake’s classic music for The Avengers final TV series, which includes an attractive 16 page booklet with full colour stills and extensive notes on music and episodes from the TV programme.

The Avengers TV series embodied the style and flamboyance of sixties Britain and the music score was right on the mark.

Alongside Johnny Dankworth and Laurie Johnson, Howard Blake is the third, none-the-less important, but often forgotten, contributor to The Avengers TV series music. Dankworth’s laid-back jazzy theme was the signature tune of the first three series, while Johnson penned the flamboyant rousing up-tempo theme to the three series shot on 35mm film.

Brought into the job late in the series in 1967 by Laurie Johnson, and on the recommendation of Bernard Herrmann, Howard Blake scored ten episodes in the sixth and final series starring Linda Thorson as Tara King alongside the stalwart Macnee. From big-band sound with modern jazz inflections and spooky trombone choir, flutes and vibraphones, to bass clarinets, solo piano, timpani, amplified harpsichord, 'wah-wah' guitar and Fender-Rhodes electric piano, Blake created a rich and relevant score that remains a classic to this day.

Today, composer Howard Blake is internationally renowned for his delightful and other-worldly masterpiece The Snowman, a version of which was sung by Aled Jones and reached number five in the UK pop charts in 1985. Other international successes include Blake’s Piano Concerto commissioned by the Royal Festival Hall for Princess Diana's 30th birthday with the composer himself as the soloist at the gala premiere in 1991, and the Violin Concerto, which premiered in the 1993 Leeds International Concert Season.

With a varied and rich opus that includes works for children, choral, chamber, orchestral, ballet, opera, theatre, film and TV, Howard Blake was awarded the OBE in 1994 in recognition of his services to music in all its forms.