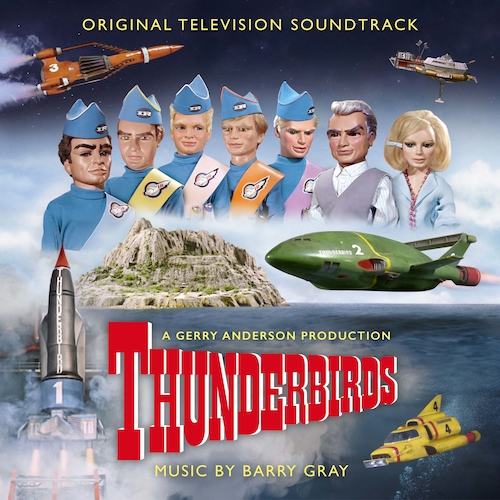 To celebrate Gerry and Sylvia Anderson’s legacy, Silva Screen is releasing music from the Anderson’s iconic TV shows in CD, digital and vinyl formats. Following the releases of UFO and Supercar soundtracks, Thunderbirds is the 3rd release in the series. It is newly compiled, mastered and designed by the creative team at Fanderson - The Official Gerry And Sylvia Anderson Appreciation Society.

The album features 37 tracks from 19 episodes (series 1 and 2), including the Thunderbirds main theme and closing titles. The tracks were not programmed to follow the episode order but to achieve an integrated listening experience. The best bits of the sixties’ soundscapes are here. The Thunderbirds soundtrack is an effective time capsule as Gray’s music veers into British spy genre, Latin pop, exotica, urban jazz and military marches. Beautifully composed and conducted, the score reflects the moods of the scenes, from dangerous to romantic, no-nonsense to silly, fraught to fragile. The score’s musical landscape was given cohesion by Gray’s masterful use of leitmotifs. Perhaps, Barry Gray’s creative role in Thunderbirds is comparable to John Barry’s in early James Bond movies.

Barry Gray was a classically trained composer and a versatile musician and was amongst the first composers to use electronic instruments in music for television. Best known for creating the music for most of the Gerry & Sylvia Anderson television series in the 1960's and 70's (Fireball XL5, Thunderbirds, UFO, Space:1999), Barry Gray’s complete musical opus is still not commercially available in its entirety. Fanderson, dedicated to the productions of Gerry Anderson, has gained access to all Barry Gray's original studio tapes and have undertaken a major re-issue project. Together with Fanderson, Silva Screen Records is championing Barry Gray’s incredible musical opus and is releasing the material in a series of physical and digital albums and vinyl records.

The Vinyl version is a double LP in a gatefold sleeve on Sky Blue Coloured Vinyl.

Some of Barry Gray’s best music was composed for Thunderbirds, and much of it is here – another good addition to Silva Screen’s release of his work. 8/10
- Sci-Fi Bulletin

You can buy this album with total confidence – it’ll rescue you from boredom every time you play it. 10/10
- Sci-Fi Online