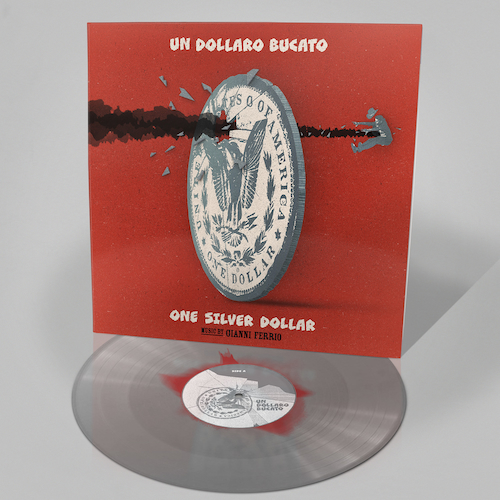 
The classic 1965 Spaghetti Western, “Un Dollaro Bucato” (Blood for a Silver Dollar) was an Italian/French collaboration directed by Giorgio Ferroni in which ex-Confederate lieutenant Gary O’Hara is duped by a corrupt landowner and mistakenly kills his brother. Gary is also shot and left for dead but is saved by the silver dollar he carries in his pocket, enabling him to return and avenge his brother’s death. The film’s release in America saw the title changed to “One Silver Dollar” and its star’s name changed from Guiliano Gemma to the rather less Italian sounding Montgomery Wood, under which moniker Gemma continued to perform.

Ferrio’s music for “Un Dollaro Bucato” has all the galloping excitement and standoff tension of Morricone’s soundtracks for Sergio Leone’s classic Dollars Trilogy and was used by Tarantino in his 2009 film “Inglourious Basterds”.

"Silva Screen Records have chosen well. Ferrio’s Un Dollaro Bucato remains a hugely popular title. In more recent times, cues have found their way into Quentin Tarantino’s Inglourious Basterds (2009), and been featured in the Red Dead Revolver video game series. Silva Screen has created a stunning vinyl package containing 21 beautifully produced tracks. It’s a stand out example, and obvious that a great deal of thought has gone into this project. Not only does the sleeve contain some creative, new artwork, but at the same time it maintains the retro style reflective of the much loved 60s genre. Best of all perhaps is the 12” platter, an eye catching piece pressed in a stylish silver & red coloured vinyl, an element which ties in rather perfectly with the ‘silver’ and ‘blood ‘of the film’s alternative title. It’s a shimmering example of how vinyl can (and should) be produced for the ongoing revival. Long may it continue to shine!" - Cinema Retro