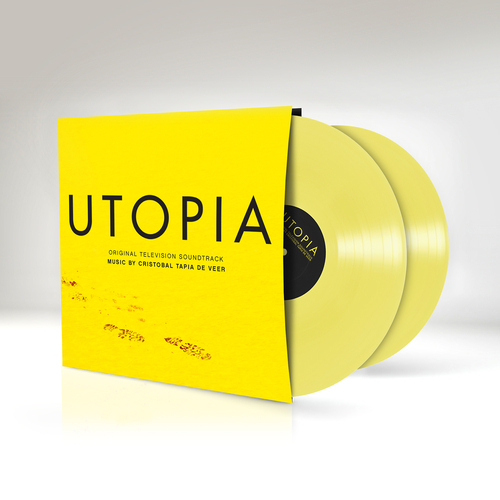 Chilean composer Cristobal Tapia de Veer's original music for Channel 4’s ultra-violent masterpiece Penned by Dennis Kelly (Matilda the Musical), Utopia is a domestic thriller that can equal the current output of American television. The six part series revolves around a group of graphic novel fans who discover a terrible secret. Stylish, intelligent and cinematic the show has now been confirmed for a second series in 2014.

Based in Canada the composer delivered a much praised score for the BBC production The Crimson Petal And The White and then moved to London for six months to complete as he says, "six months of guerilla composition" for Utopia. Critically acclaimed, the score features instruments ranging from a rare Chilean trutruka recorded in Borough tube station to the percussion sounds of a rhino turd from Zimbabwe. This is one of the most eclectic and innovative scores in a long while.

“…a twitiching, engaging and unique score that sounds unlike anything we’ve heard in some while. We’ve been waiting for this release since the show appeared on telly so we’re well chuffed now it’s out.” - Record Collector 5*

“Utopia by Cristobal Tapia De Veer is definitely some of the weirdest music I have ever heard.” - Den of Geek

“…there's something irresistible about the oddness of it all.” - CultBox

“Credit goes to Cristobal Tapia De Veer for his awe-inspiring work with the music.” - Vada Magazine

“By turns unsettling and playful, it was absolutely intrinsic to the tome, and success of the show.” - Viewing Gum (2013 Soundtrack of the year)

“This show. This music. Everything about is so odd and so perfect. The soundtrack to this show is quite honestly one of the best I've ever heard…” - Waterman Butterly (Top tracks of 2013 - UTOPIA OVERTURE - CRISTOBAL TAPIA DE VEER)